As some of you know, I’m crazy about books, especially old ones. I wouldn’t consider myself a serious book collector, but a couple times a year I treat myself to an early printed book of some kind. Although early editions of drama in the English language tend to be far beyond a graduate student’s budget, Continental imprints are often fairly affordable. It’s my research on Renaissance language-learning and translation that led me to my latest acquisition, a 1610 bilingual edition of Giovanni Battista Guarini’s tragicomedy Il Pastor Fido.

Adding the French title Le Berger Fidelle to Guarini’s Italian play, the title page of this book adds that it is “Faict Italien et françois pour l’vtilité de ceux qui desirent apprandre les deux langues” [Made Italian and French for the use of those who desire to learn the two languages]. Il Pastor Fido was first published in Venice in 1590, in quarto. This stout octavo edition follows a series of  French, English, and Spanish translations of the play — as well as an Italian edition issued in London by the stationer John Wolfe — and aims specifically at an audience of language-learners. In a preface, the translator asserts that the Italian language “entre les langues vulgaires a cest ho[n]neur d’auoir plus de grace & de mignardise que pas vne autre, pour exprimer vne amoureuse passion” [among the vulgar languages has this honor of having more grace and preciousness than any other, to express an amorous passion]. Il Pastor Fido, a tragicomedy featuring ancient prophecies, unrequited love, and mistaken identities, offers fertile ground for these “amorous passions.” Here, then, is a dramatic application of the language-learning techniques Joyce Boro finds in the period’s bilingual prose romances.

Like many bilingual language-learning books issued in Europe at this time, the play’s text is arranged in a facing-page layout, Italian on the verso, & French on the recto. This arrangement extends to the paratext as well. “Le persone che parlano” appears before the Italian list of characters, facing “LES PERSONNAGES” in French, while during the first act one sees “ATTO PRIMO” at the top of each verso, “ACTE I.” at the top of each corresponding recto: 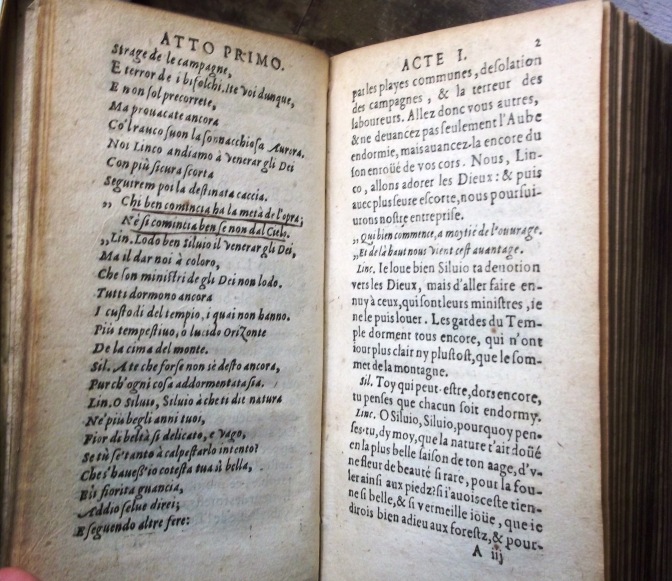 Like many bilingual or polyglot publications from the sixteenth and early seventeenth centuries, this book differentiates languages with its use of typefaces. Italian appears here in italic, while the stationers selected roman for the French. Altogether, this book presents an example of how dramatic publications could be designed specifically for language-learning, and — as Anne Coldiron and Guyda Armstrong have suggested — shows how the principle of translation was not only a linguistic concern, but also a typographic and paratextual concern.