The subject of this post is dramatic quartos. Scanning a spreadsheet of our Special Collections holdings, I’ve counted a modest, but respectable total of 24 playbooks published in quarto between 1620 and 1660. (There are a number of later c17 playbooks too, but I’m keeping the window narrow for now.) This collection include works by Francis Beaumont, George Chapman, John Fletcher, Philip Massinger, Thomas Middleton, and James Shirley, among others. Shirley is the best-represented playwright in Northwestern’s playbook collection by a good margin; of the 24 items here, 10 feature Shirley’s name on their title pages.

Printed in 1640 by Thomas Cotes for William Cooke, The Humorous Courtier is one among several of these Shirley playbooks. This is a Caroline-era comedy of courtship in which Duke Foscari contends for the hand of the Duchess of Mantua along with a gaggle of pompously eloquent, misogynistic, and foolish suitors. (Naturally, since he is a duke, he woos in disguise.) An especially interesting feature of this playbook is the prefatory catalog of 20 Shirley plays available in print at the time of this book’s issue: 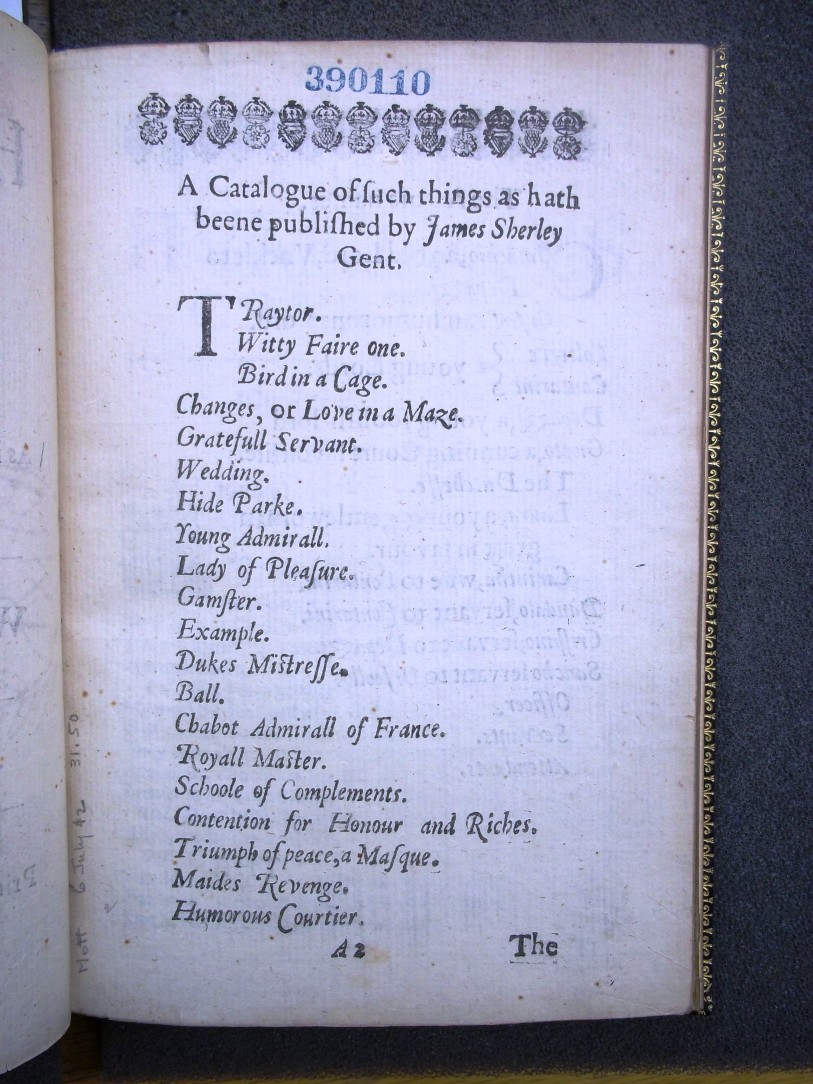 Such catalogs were becoming more common at this time and served a growing audience for printed drama in light of the closing of the theaters (also in 1640). Since Cooke published other works by Shirley, he obviously had something to gain by including this list. 9 of these titles can be found at Northwestern, along with The Opportunitie, not listed here but also published by Cooke in 1640. (For those wondering, The Opportunitie was entered in the Stationers’ Register to Andrew Crooke and William Cooke on April 25, 1639, about 3 months before The Humorous Courtier was entered to Cooke.)

Published three years earlier by Crooke in 1637, The Gamester is a triple-plotted Shirley comedy that treats of sex, gambling, and dueling. This is one of Northwestern’s more interesting quarto playbooks on account of its “used” condition. If you can’t already see what I’m talking about just by looking at the title page, keep scrolling… 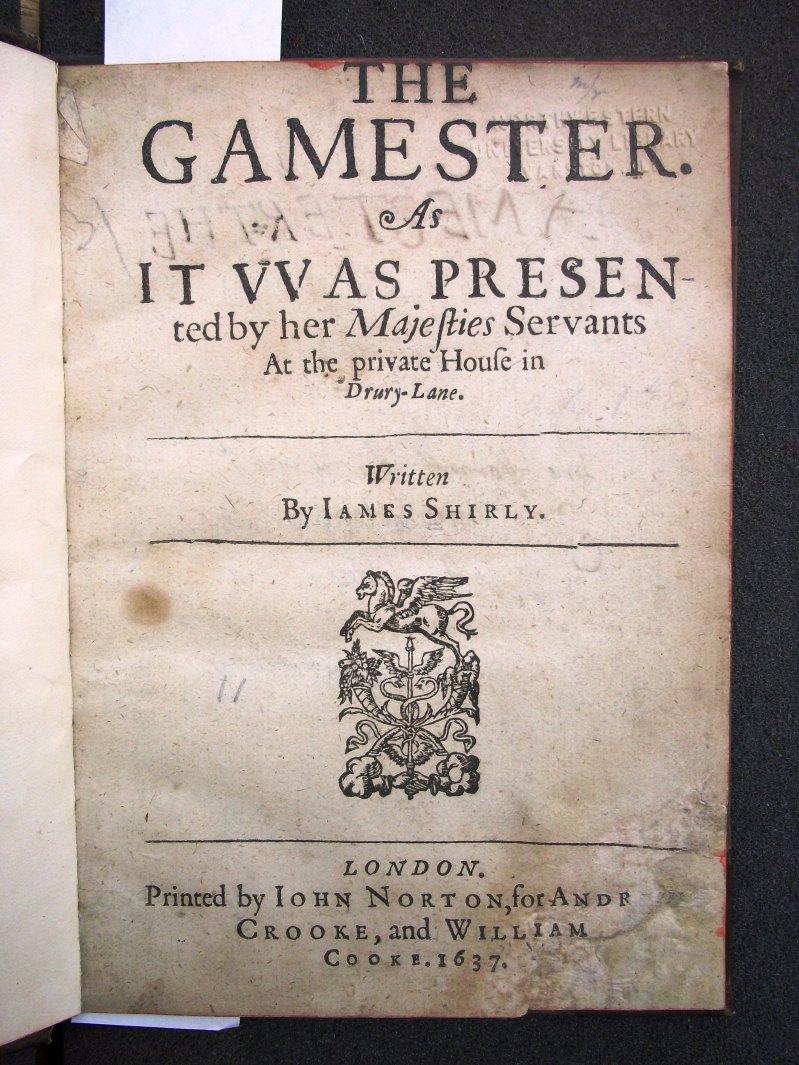 Although prefatory material was not uncommon in printed drama at this time, the Gamester quarto of 1637 does not feature any.  To remedy the situation, perhaps, an early reader tipped in (between sig. A1 and A2) their own “Persons of the Comedy”: 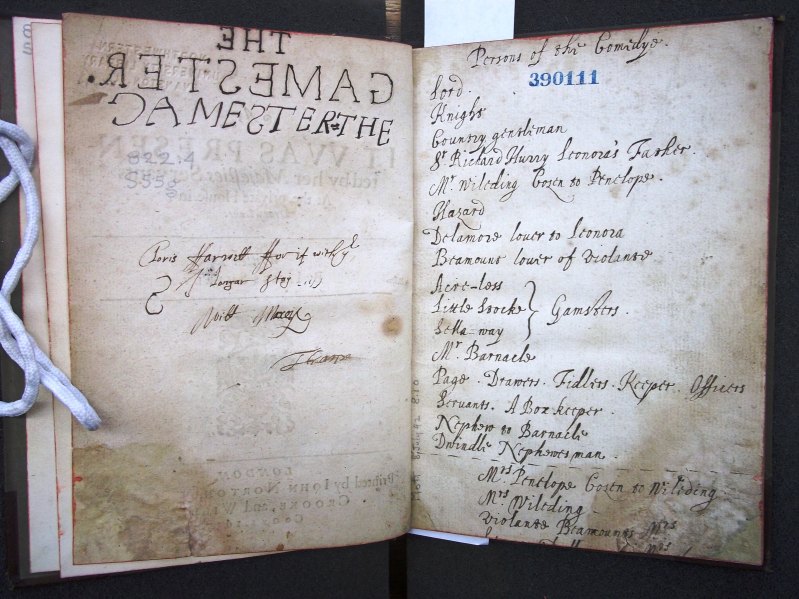 These markings show us how one reader attempted to bridge the gap between this Shirley quarto and other playbooks with useful character lists or other paratextual materials. Rather than forcing readers to jump into the play without any foreknowledge of the characters, this inscribed copy offers a guide to the “Persons” (“Hazard,” or “Mr. Barnacle”) and, in some cases, their relationships to each other (“louer of Violante,” “Nephew to Barnacle,” “Cousen to Wilding”). You can see that some inscriptions have been cropped at the bottom, most likely when the book was bound.

If we look at the title page’s verso, there is further evidence of book use. First of all, it looks like the same reader has traced the title through the leaf and written it again — strangely — in a half-backwards script. (These markings we can call “pen trials.”) Below this, however, are fragments of a verse and what could be the name of our reader here. Deferring as usual to the more gifted paleographers out there, I transcribe thus:

Cloris farwell for if with y
I longer stay ….

Searching EEBO for “Cloris farewell,” I turned up what seem to be a few versions of a song. John Wilson’s Select ayres and dialogues for one, two, and three voyces, to the theorbo-lute or basse-viol (1659, Wing W2909) includes a song attributed to Henry Lawes that begins, “Cloris, farewell, I now must go, / for if with thee I here doe stay…” (O2r). The music appears here, too. There are other “Cloris” songs in this volume, and a search through EBBA turns up quite a few others. Published shortly after Wilson’s book, Thomas Jordan’s  A royal arbor of loyal poesie (1663, Wing J1058) includes a song entitled “The Broken Contract,” which appears with “Tune, Cloris farewell, I needs must go” (2D4r).

In addition to these two, I found a similar verse in a miscellany published in 1694 by Jacob Tonson (Wing D2237). The book’s extended title is The Annual miscellany, for the year 1694 being the fourth part of Miscellany poems: containing great variety of new translations and original copies by the most eminent hands. Yale’s copy is available to EEBO subscribers, and I found this relevant section (copied here according to fair use): 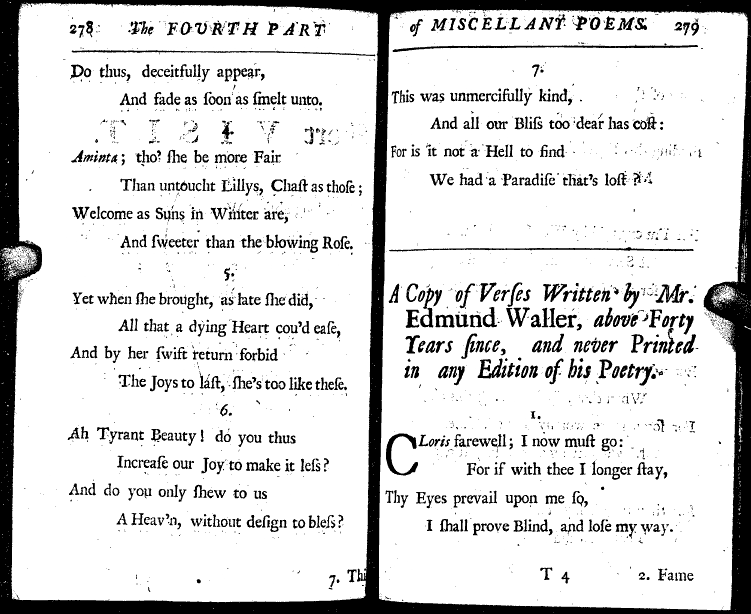 Because they include the phrase “I longer stay,” one might suspect that the lines inscribed in Northwestern’s copy of The Gamester could be a recollection of Edmund Waller’s version of this song. However, because we’re dealing with lines that appear to have been circulating freely for many decades in manuscript and print, we cannot definitively say that our reader is copying from any particular source. A better question might be: why would a reader inscribe these lines in this particular playbook, as opposed to another? What is it about The Gamester?

As for the person responsible for the Cloris lines, the title-tracing, and the “Persons of the Comedy” (“Will[iam] Macey,” perhaps?) there is more searching to be done that would refine this investigation. But until then, know that Northwestern has a fair number of early quarto playbooks, and quite a few of them by James Shirley.